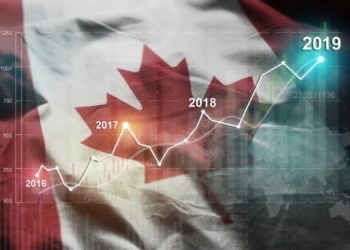 Canada’s housing market continued to make a material impact on the nation’s economy, according to Statistics Canada.

Over the last quarter of 2019, real estate, rental, and leasing segment reported a 0.6% growth, contributing $253.87bn to the overall economy. This is the seventh consecutive quarterly growth in the segment, driven largely by robust housing resale activity.

Overall, Canada’s gross domestic product hit $1.98tn during the quarter, representing a 0.13% increase. On an annual basis, the economy grew by 1.6%.

Daniel Wong, a contributing editor at Better Dwelling, said the finance, insurance, and real estate (FIRE) industries were able to grow to $386.7bn during the quarter, hitting a new record-high share of the overall economy at 19.53%.

“It was also growing significantly faster than the general economy at the end of the year. This indicates the economy is once again leaning on FIRE, after taking just a brief break,” Wong said in a think piece.

Compared to the same quarter last year, the FIRE industries recorded an increase of 2.57%.

“Since this is largely a credit-driven segment, it will be interesting to see what lengths the government will go to, to increase household debt. Canadians are already some of the most indebted in the world,” Wong said.